Camera Projection in OctaneRender for Modo

EDIT: The post below is now redundant, since the OctaneRender for Modo plugin automatically support camera projection texture locator.

I was asked it was possible to setup camera projection textures in OctaneRender for Modo.  The answer is "Yes", although at the moment it requires some manual processing.  To set this up, add an Octane Override for the Modo material and then open the Viewport.

I plan on semi-automated the above where possible in the next release.  In particular, adding the ability to connect the Modo camera transform node to the Octane Transform node would be great. 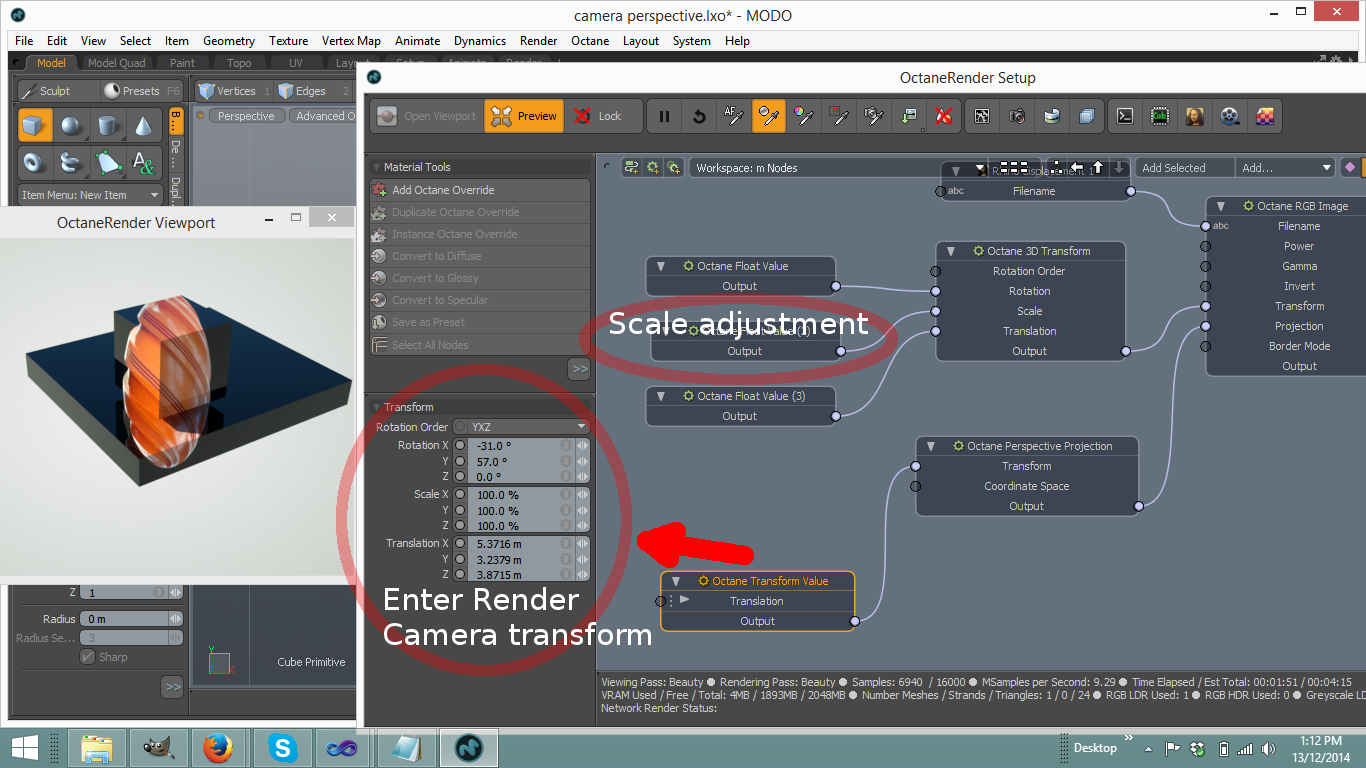 Posted by Paul Kinnane at 18:56 No comments:

LiveDB Texturemap Folder
This is the location where the plugin stores texture maps when a material is loaded from LiveDB. The default is located in the Poser Temp folder.

I suggest to change that to a special folder in Posers Runtime. (I use runtime:textures:Octane). The reason for this is that the contents of your temp folder may get lost (if you clear the temp folder or if you move to a new machine). Your Poser scene files will then no longer be able to find these textures and you have to load the same material again from LiveDB. If the folder is located in the poser runtime they will be moved with the machine and included in the regular backups.

Poser Smoothing vs Octane Smoothing
Some materials of flat surfaces do not smooth very well in Octane. If this happens you can turn off the smoothing for that material which should no matter since it is a flat surface. There is another way however to prevent this problem and that is to use Octane smoothing. You can do that by setting the smoothing Angle in the setup window to 80 and reconvert the material. The Octane smoothing works very well and you can modify the angle to smooth in the setup window. The flat surfaces will now work fine without modification. In some cases however there is a seam problem with gen4 figures. If this happens you can set the figure to Unimesh and the problem will disappear.

Fast way to duplicate octane material settings of an entire scene
Suppose you have two or more scenes already built and you changed the materials of all the props and figures in that scene and you now want to have the same materials in the other scenes, of course you can save the materials as poc files – one by one. But there is a faster way – not really a feature but a discovery. What you do is to load the first scene with the materials, then open the plugin. Now close the plugin again and load the next scene – without restarting poser – and start the plugin again. Now you will find that all the materials of the first scene have been applied to second scene as well. Not only for props, but also for figure. In case you need the same emitters in the scene, create those before you start the plugin and the previous settings will be applied as well. A real time saver.

HDR Light Studio and Interiors
If you want to use HDRLS with interiors use the following trick. Set all the non camera facing walls, ceiling and floors as well as other light blocking features to “Shadow Visibility” None. That way the structure still reflects but does not block the HDRI lights. Use the other Poser cameras as well to position the HDRI lights. The HDRI light do work well together with Daylight and light emitters.
Posted by Paul Kinnane at 02:01 No comments:

Bendbox (from the Otoy forums) has provided a novel way to highlight surface edges for illustrative purposes when rendering with Octane.  Below shows the material which does this, which is based around a Mix Material with 2 Dirt nodes attached to the inputs.

Posted by Paul Kinnane at 15:14 No comments:


VentureBeat have put out a great interview with Jules Urbach (Chief Executive of Otoy) about the release of the X.IO service.  Have a read at Otoy takes 3D graphics and virtual reality app development into the cloud.
Posted by Paul Kinnane at 15:16 No comments:

Many thanks to Paul King from www.prime.net.nz for the following blog entry.
Any red blooded Octane user would struggle to overlook the fact that with a multi-Nvidia GPU setup, they have a fairly decent SLI gaming rig on their hands.

The problem is that Octane performs best when all Nvidia GPUs are allocated exclusively to Octane, with the mundane task of driving monitors delegated to the generic GPU most motherboards have built in.

Should the need to smite a few bad guys in Battlefield 12 become pressing, an Octane user is faced with crawling around behind the computer, disconnecting monitors from the motherboard ports and connecting them to their Nvidia card ports.   And of course putting them back again afterwards.

Most monitors have a few port types available, as do the GPUs, and by using two of these at once it is nominally possible to leave both motherboard and NVidia GPUS connected to the same monitor even for multiple monitor setups.  The Windows display manager often struggles with this arrangement however; going into paroxysms as it keeps detecting and attempting to start unused connections, particularly while the user is attempting to switch multiple monitors one by one from one GPU type to the other, or to a hybrid combination  of both.  The only sure way to succeed involves physically disconnecting the cables from ports that are to be switched off.

A windows app called Display Fusion (www.displayfusion.com) however solves this problem by use of stored profiles that can switch multiple monitors simultaneously from one combination of inputs to another – eliminating the flaky process of sequential manual switching via Display Manager.  Users can thus leave the cables in place connecting all GPUs to all monitors at the same time.

Users can also set up application specific display profile settings (triggered when app is launched) and manage a range of other display related tasks. There is a free version and a more fully featured paid version ($US25).

NOTE 1:  If you happen to ever use a hybrid of motherboard GPU and Nvidia cards simultaneously to drive a multi monitor setup, this won’t work well while Octane is active. It is important to ensure that BEFORE Octane becomes active there is no active connection between any Nvidia Card and ANY of the monitors (whether achieved by physically disconnecting , or deactivating connections via monitor profile switching).

Consequences otherwise are that long freezes and lags will occur while NVidia Cards are set as prioritised to Octane - even if the monitor in use by the ArchiCAD/Octane application window is being driven by the motherboard GPU and not an Nvidia card; when windows desktop is extended to span across monitors , the whole user interface system then has to wait for the already busy Nvidia card to complete every refresh of those parts of the user interface occurring on it’s monitor (desktop display, mouse pointer etc.).

NOTE 2: DVI-D (single) and HDMI ports are generally no good at driving displays beyond 1920x1080 resolution (without flaky driver hacks and compromised refresh rates). You will generally need a dual DVI-D or DisplayPort connection to drive monitor resolutions higher than this.  HDMI version 2 has recently been released and can in theory handle much higher resolutions, but the ports at both ends would need to meet the new standard, and while there are 4K capable TVs/monitors available with HDMI 2, so far very few GPUs use it.
Posted by Paul Kinnane at 21:53 No comments:

Clearing all OctaneRender for Poser data

Following on from Accessing Octane plugin data from python in Poser, below shows how to delete all Octane data from your Poser scene.

3) Save the Poser scene (all previous Octane data will be cleared)
Posted by Paul Kinnane at 03:04 No comments:


Generating Grass Blades in OctaneRender for ArchiCAD from Paul Kinnane on Vimeo.
Posted by Paul Kinnane at 18:09 No comments: